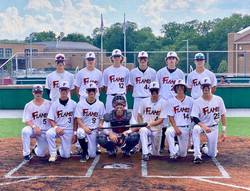 15U Flames - Hargreaves wraps up an incredible season with a Sabrecat Wood Bat World Series Title! -

The 15U Flames went 7-0 in the tournament outscoring their opponents 84-18. They threw a 3 hit shutout in the finals beating KBC Prime 3-0. In 38 innings they had a team ERA of 1.842, with 8 hitters hitting over .300 for the tourney and 9 batters finishing with a .500 or better OBP! Well done players, coaches AND famililies! You represented your Flames family well!