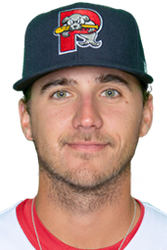 From the Providence Journal:

PAWTUCKET — Pawtucket’s Kyle Hart threw a complete-game five-hitter Thursday morning in his Triple-A debut to lead the PawSox to a 4-0 victory over the Lehigh Valley IronPigs at McCoy Stadium.

The 26-year-old Hart struck out eight with no walks in his first career complete game. It was the fourth-straight game that Hart has pitched at least seven innings. Hart, who threw 108 pitches and 74 for strikes, retired the first seven batters of the game as well as 16 of the final 17 he faced.

The PawSox gave Hart all the support he would need in the fourth inning. After a double by Sam Travis and a walk to Josh Ockimey, Bryce Brentz lined a two-run single to right to put Pawtucket in front, 2-0. Brentz finished with six RBI in the three-game series against Lehigh Valley.

The PawSox got two more runs in the seventh inning when Brentz drew a one-out walk and scored on a two-run homer by Jantzen Witte.