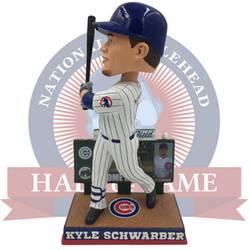 Schwarber Gets His Own Bobblehead! -

MILWAUKEE, Wis. (WTHR) - Kyle Schwarber was a star catcher on the Indiana University baseball team from 2012 through 2014 before the World Champion Chicago Cubs chose him with their first round pick in the 2014 Major League Baseball Draft.

Schwarber's homer traveled an estimated 438 feet, landing on top of the right field video board in Wrigley Field, and was the difference in the series-clinching win for Chicago. The Cubs placed a glass case over the ball, which is represented on the scoreboard behind the Schwarber bobblehead figure.

The bobbleheads are available at the Hall of Fame's online store.