Former Flame Jacob May Drafted in 3rd Round 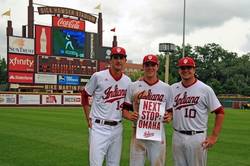 3 Indiana Hoosiers, 1 North Carolina Tar Heel and 1 Louisville Cardinal, all former Cincy Flames, will be playing in the College World Series starting this week.  Michael Basil, Kyle Schwarber, and Kyle Hart all helped the Indiana Hoosiers to their first regular season Big Ten title in 81 years.  They followed that up by winning the Big Ten Tournament, hosting and winning the Bloomington Regional, and sweeping the Super Regional from Florida State in Tallhassee.  Adam Engel and Louisville earned their way to Omaha by sweeping the Super Regional from Vanderbilt in Nashville.  The two teams will face off in the first round of the College World Series Saturday at 8 p.m. on ESPN. Taylore Cherry and UNC earned their way by downing Florida Atlantic in the Chapel Hill, NC Super Regional.

The Cincy Flames Baseball Program is recognized as one of the premier youth baseball organizations in the country. Founded in 1994 by Jay Basil, it has consistently delivered on its Mission Statement: